Member of Parliament for Ynys Môn

Virginia was first elected in 2019 - the first Conservative MP to be elected to represent Ynys Môn for 32 years and the first women for 70 years.

Following a career in pharmaceuticals where she worked for GlaxoWellcome and at Director level at UBS and HSBC - Virginia retrained as a Maths teacher and taught disadvantaged adults for four years. As chair of the charity ‘Save the Baby’ at St Mary’s Hospital, Paddington - Virginia helped raise vital funds to support research into early pregnancy complications and miscarriage. Virginia helped to launch the charity IntoUniversity and worked as a coach mentor for the charity ParentGym. As Director of Women2Win Virginia led the campaign to increase the number of Conservative women in local government and Parliament.

Virginia has written for a number of publications including The Times, The Independent, ConHome and Reaction.

Virginia is married with three children and a cocker spaniel. They enjoy the outdoor life and being part of the Anglesey community. 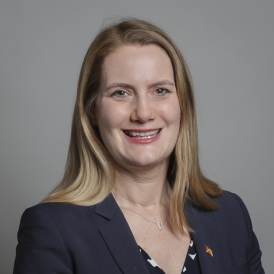