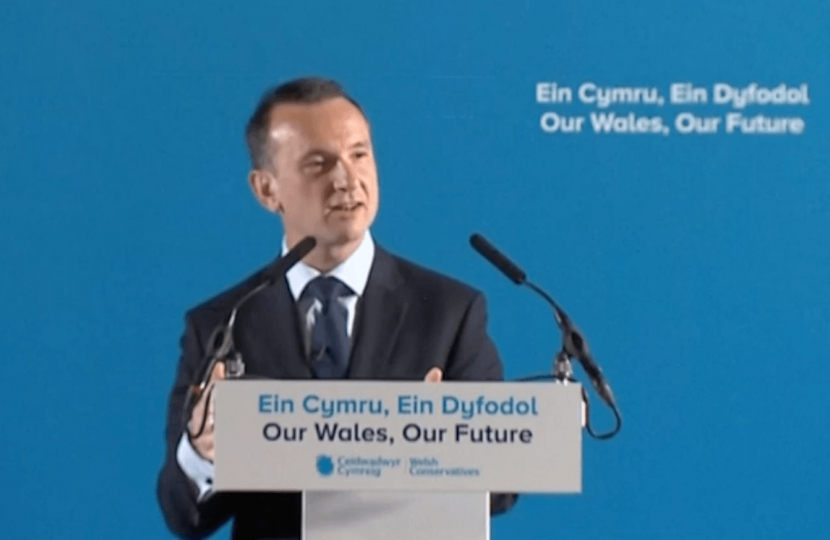 I am delighted to be back here in Llangollen for the 2019 Welsh Conservative Conference.

There is no better advert for Wales; our culture, music and art than the international music Eisteddfod that is held here in Llangollen. Now in its 73rd year I am reminded about the reach and impact that Welsh culture has around the world. How we attract people from across the globe to our towns, cities and communities, and how we are rigorously promoting our country beyond our borders.

In March this year we held the 3rd Wales Week in London – a great success - which has now developed to Wales week in Paris, Berlin, Melbourne, New York, Ohio and as the MP for Barry there was even a Gavin and Stacey theme with Wales Week in Essex.

Every event promoting and highlighting what makes Wales-Wales and showcasing what we do best. From the launching of our Welsh-Franco business club at the British Embassy in Paris, to celebrating the Royal Welsh College of Music and Drama’s 70th anniversary in New York.

But before I delve into my speech can I take a moment to thank all of you for your hard work and support to our Party, often in difficult times.

Your dedication to our values and our mission makes the challenge of winning more Council, Assembly and Parliamentary seats across Wales possible.

I especially want to thank my ministerial team; from the newest member, Minister Kevin Foster to the longstanding and ever present Lord Bourne.

And of course, Paul Davies and his brilliant Assembly team.

It’s a privilege to work with them.

I also pay tribute to the excellent work, advice and support of my PPS Glyn Davies, to Craig Williams who has taken up a new role in DEXEU, and the determined Andrew Rt Davies all of whom have only helped to strengthen the Welsh Conservatives’ position still further in Wales.

So much of what goes on within the Welsh Conservative Party is guided by our brilliant Party chair and our Director, Byron Davies and Richard Minshull. I challenge anyone to compete with this dynamic duo of election running, strategy developing gurus.

Most recently seen during the Newport West By election where our excellent candidate Matthew Evans saw a 2.4% swing from Labour to the Conservatives, in a very difficult environment.

Paul served his constituents of Newport West for 32 years and he did so with generous grace, ability and charm. I recall him offering to give me a lift home, when he dropped me off in Newport, along with a copy of his book, ‘How to be an MP’, having already been elected for a couple of years at least I manged to get a discount!

Steffan’s time in the Assembly was cruelly cut short. There is little doubt about the positive mark he made on those around him and he was undoubtedly a future leader.

Both Steffan and Paul join the ranks of great Welsh politicians from all parties who have made significant contributions to UK and Welsh life and they will be missed by friends, family and colleagues alike.

Now conference I do not say this lightly but Jeremy Corbyn and I are as one…on one particular issue.

When he tells his supporters that “Scotland and Wales have for too long been held back by successive governments” …. I agree.

For too long Wales has been held back by this Labour government, which has failed to deliver.

With Welsh NHS targets are all too readily missed, are we confident that Labour is delivering for the people of Wales?

When school funding has fallen by almost a tenth over the last ten years and exam results continue to show deterioration in the international PISA rankings, do we think Labour is delivering for schools pupils across Wales?

When transport infrastructure projects such as the M4 relief road are repeatedly delayed, in spite of the money being available, do we think Labour is delivering a Wales fit for the future?

The Conservative Party has never shied away from underlining our passion for Wales, our Welshness and our contribution to the development of our Nation.

We all remember that:

It was a Conservative government that created S4C in 1982, but earlier this year we completed a full review of the channel to ensure it is fit for purpose for the next generation in this digital age.

It is a Conservative Government that developed Devolution to be truly responsible and accountable for its decisions and actions.

It is hard to believe that the last Labour Government left us with the LCO system.  – You may need reminding because it wasn’t the most elegant form of devolution and we all know they will do anything to forget it.

A situation where the Assembly had to seek permission from the UK Government to change laws – even to change the formation of committees.

What sort of devolution was that?

And the Nationalists and Labour Party hate the fact it was a Conservative Government that passed the Wales Act 2017 that delivers a law making, stable and wholly accountable devolution settlement

Where the Welsh Government can be held truly responsible for their success or failure in public services, be that in health, education or housing – paving the way for a real change – by electing Paul Davies as the next First Minister.

And it was Welsh Conservatives through this Act we righted the wrongs of 50 years ago, where powers over water policy were fully devolved, preventing the scandal of Tryweryn ever happening again.

All too often people hear the narrative of the Nationalists and Labour or their repetition in the echo chambers of Facebook and Twitter, - that we don’t care about Wales.

Well I stand ready to compare our record with that of our opponents.

We need take no lectures from Labour on which party is the real party of devolution and which is the party the delivers for Wales.

We all remember the years of underfunding of the Welsh Block Grant. Labour - in office - argued for 13 years for reform – but didn’t deliver a penny difference!

Within 9 months of becoming SoS the PM and I agreed a new funding settlement for wales that now delivers £120 for every £100 spent in England – a 20% Conservative devolution dividend to Wales – Something Gerry Holtham called ‘a very fair settlement’.

We are committed to four growth deals with tens of projects that are designed to support regions in Wales to develop their local expertise ensuring they play their full part in the UK’s economic growth.

From the ground breaking Digital Infrastructure projects in the North Wales Growth Deal to make the region the best connected in Europe to the Active Homes project in Swansea – that develops world leading materials and energy use, putting Wales at the heart of our green revolution to creating with world’s largest Compound Semi-Conductor Cluster in Cardiff and Newport, meaning Wales will develop the global technology that makes 5G a reality to this generation.

And of course, the scrapping of the Severn Tolls. A manifesto commitment delivered, which:

It is the stability and unity of our nation that creates unparalleled opportunities to propel the innovation from our communities to the global stage.

Our technological expertise whether in security, medicine or education - like:

Of course, these world class services and organisations are driven by our people, our towns and our cities, enhanced when they are interlinked.

For me, our Union stems from these communities, uniting together to under a common cause – striving for continual betterment and progression.

All transcending borders and bring businesses and enterprise together creating a critical mass that develops world leading expertise.

It means all nations and regions playing an active role in unison.

But it also means, we don’t compromise our unique culture, heritage or individualism as a nation, to be part of a something greater. By being part of:

It is a union that unites under a common cause to drive tourism, create businesses and generate global centres of excellence, while still retaining our ability to celebrate our individuality within regions, super-regions and nations like Wales.

To make the union stronger each nation and region must play its full part. Wales punches well above its weight and just as Wales began as a collection of villages and communities and grew into this great nation, so too the Union was made from cities and regions and nations coming together to create the Union of the United Kingdom.

Leaving the EU makes the Union of the UK more important and relevant than ever before.

And leaving the EU was never going to be an easy process. But we will leave.  As a minority administration we are determined to find a solution to end our opponent’s from blocking departure and enabling us to honour the outcome of the referendum.

But let us recognise that leaving the European Union provides us with great opportunities. 90% of global growth will come from areas outside of the EU over the next ten years.

Yet we cannot simply ignore the biggest market on our doorstep.

Which is why my focus is to ensure Wales is ready to take the opportunities that Global Britain brings.

We will continue to be a magnet for Foreign Investment.  – After all, last year we still attracted more Inward Investment that France or Germany combined.

Wales will be at the heart of our UK - Africa Consortium.   - The PM and I took a number of Welsh businesses to Africa last year to ensure the UK becomes the No1 investor to the that continent.

We will regenerate our local communities by supporting local Authorities and attracting new investment – Just 4 weeks ago we presented the first ever Welsh portfolio of opportunities at the MIPIM property conference in Cannes.

Wales is central to our Industrial Strategy.   – Small Modular Reactors targeted at Trawsfynydd, the Aston Martin Centre for electric vehicles in St Athan and the carbon composite wings of the future in Broughton

Our Cyber Security Centre, our Compound Semi Conductor Cluster, Our Creative Industry Hubs, our Advanced Manufacturing Institute, our expertise in agri-tech, fintech, Wave Test Beds and Steel Science Centre – all based here in Wales focussed on promoting innovation, research and excellence as part of a global Britain.

And in doing so we will celebrate all the cultures from all over the world that have made Britain their home and who have contributed to the success of our great nation.

Let us be unashamed of our record as Conservatives as we deliver for Wales and will continue to do so both in Cardiff Bay and in Westminster.

Let us be resolute in supporting our culture, language, identity and history but also recognise that we have great skills, assets and resources that play full roles in our precious Union.

Above all let us take hold of the opportunities before us to boost our economy, renew our bonds of union and celebrate what makes us unique and great, because as we all know, we are stronger together as part of a Global Britain

So, whether you are an environmentalist, business leader, sports man or woman or entrepreneur the Conservative Party is your party and let us deliver for our Wales to secure our future.