Welsh Government's sluggish pace is letting the public down 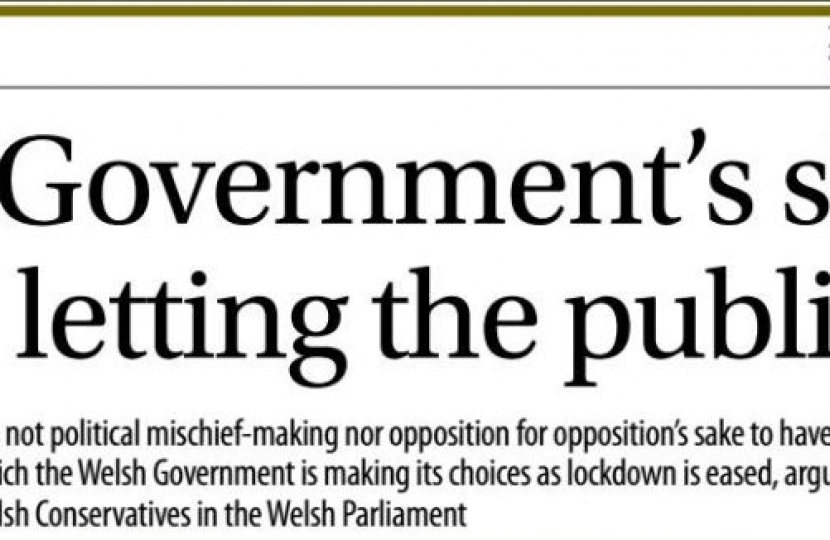 Argues Paul Davies MS, Leader of the Welsh Conservatives in the Welsh Parliament in the Western Mail, Friday 26th June 2020

“Under my leadership we will engage constructively with the government. Not opposition for opposition’s sake. Not scoring party political points, or making impossible demands, but with the courage to support where that’s the right thing to do.”

Not my words, but those of Sir Keir Starmer when he became Leader of the Opposition in Westminster in April. Yet they are words which I share and have also delivered upon. Constructive engagement at the time of this unprecedented Covid crisis is exactly what the public expect from those of us in senior positions in public life. It is not the easiest path, but it is the right path.

It was in this spirit that I accepted an invitation to sit on the First Minister’s Covid briefing group very early on in this crisis. Not to be part of the decision making but to better understand the decision making at the heart of the biggest challenge facing Welsh Government. Perhaps, I had expected more to be shared within this group prior to decisions being taken and announced publicly. Yet the right thing to do was to remain within the group, even if that period of usefulness now seems to be drawing to a close.

Getting information out of the Welsh Government has been a real struggle in lockdown. I fully appreciate that Covid has been the political priority. As a Welsh Conservative group we’ve supported closing the Welsh Parliament and conducting business remotely. But when my Conservative colleagues have used written questions to get information on Covid-related matters, we’ve had back holding replies like this, and this and this. We are left thinking why have we bothered to be so constructive?

As Welsh Conservatives we have also taken the decision to support the Covid regulations where we can in the Welsh Parliament. We have voted for them on most occasions and abstained on others where we felt some aspects of the regulations were the right thing to do but others weren’t. When we make those decisions as a Welsh Conservative group, we don’t make them lightly. We weigh up the total content of the legislation. When Labour attacks us for not voting against these regulations, they are trying to force a thick wedge where one does not exist.

My definition of constructive criticism and responsible opposition isn’t simply to vote down every regulation or make reckless demands, it’s to try and steer a sensible, pragmatic course which balances off health concerns, economic concerns, and personal liberties. I don’t doubt Mark Drakeford is trying to do the same, it’s just we as Welsh Conservatives think he has got the balance wrong on some things.

People who know me realise that I strive to be fair minded, to find compromise, to seek a solution that brings people together. Over the last painful week or so I’ve thought long and hard about the words of my friend Mohammad Asghar. He was always interested in finding that common ground, in healing division, in taking a sensible approach. I owe it to his words of quiet wisdom – never showy, never shouted – but quiet words in which we should consider what unites us rather than divides us. That was Oscar’s Conservatism and it is mine too.

I also respect Sir Keir Starmer for taking a similar approach on many issues. This week he gave a welcome to the plan to relieve lockdown in England. To allow pubs and restaurants to reopen. To get the economy back on track. To get the health service back on track too, so that it’s focused on more than just Covid. And to get our personal lives back on track. On these things I am united with Sir Keir and with Boris Johnson. Which makes Mark Drakeford the odd one out.

It is not political mischief making or opposition for opposition’s sake to have deep concerns about the way in which the Welsh Government is making its choices as lockdown is eased. Far too many decisions have been taken in a science-free void where certain “proper” activities are prioritised over others. We’ve been able to go to garden centres for a month, but not to car showrooms. Cyclists can ride forty miles in the open air but you can’t visit loved ones in your car or on public transport if you live more than five miles away. Only this week could two people play tennis again, a ‘privilege’ not confined in other parts of Europe outside Putin’s Russia. Inconsistencies and favouritism have abounded.

And when we as opposition politicians – along with some brave Labour backbenchers – have challenged some of these aspects we’ve been told that it’s all based on science and protecting the public. A public which has, by and large, done what they are told and stayed home or obeyed social distancing. Yet we could not be trusted to access shops at the same time as other parts of the UK – not just England – and in a week’s time we won’t be able to go for a meal or a drink in a socially distanced manner either. My inbox is full of the despair not just of the people who want to obey the law but also of those who want to get some of their freedom back. But more importantly it’s full of messages from businesses large and small terrified of what the future holds if they can’t reopen soon.

The Welsh Conservatives stood shoulder to shoulder with the Welsh Government when lockdown was introduced. Where we differ is in the emphasis and priorities on how it is eased. There is an increasing economic crisis as well as a receding public health crisis. We would be failing in our duty as an opposition – and as representatives – if we didn’t constructively point that out. Wales is being left behind.