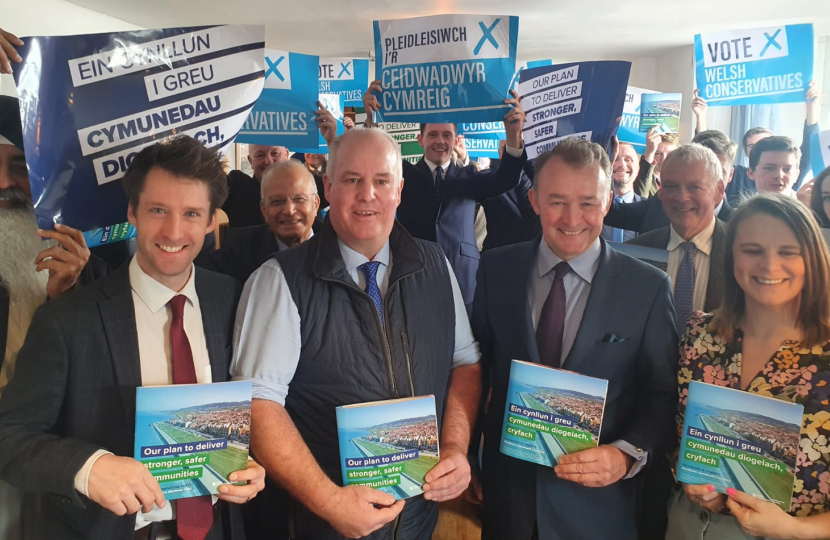 Welsh Conservatives have launched their Wales-wide manifesto for the local elections on the 5th May, setting out their plan to deliver stronger and safer communities across Wales.

The manifesto focuses on the party’s plan to empower local people, create healthier and safer communities, tackle blights on our towns and enable local jobs for local people.

It also sets out plans to secure communities for the next generation and deliver fair funding for councils after years of underfunding by the Labour Government in Cardiff.

Key pledges in the manifesto include:

The manifesto launch comes just days after the Welsh Conservatives kicked off campaigning for the local government elections at an event in Llandudno.

A record 669 local Welsh Conservative champions will fight for seats in wards up and down the country, in elections to decide who will run local services.

“Households across Wales – and the rest of the world - are feeling the financial squeeze as the cost-of-living continues to rise thanks to issues such as the rising global demand for energy, Putin’s barbaric invasion of Ukraine and the pandemic.

“The UK Conservative Government has been quick to act in helping families by increasing the Living Wage, slashing fuel duty, raising the National Insurance threshold and giving residents £150 to help pay their bills.

“Welsh Conservative controlled local authorities will also work hard to keep money in people’s back pockets by keeping council tax low and ensuring value for money for taxpayers when it comes to council services.

“Under Labour, Welsh workers are being short-changed with their pay packets more than £3,000 lighter than their Scottish counterparts and businesses are punished with the highest business rates in Great Britain.

“It is clear Labour cannot be trusted to help hardworking families. Despite having several devolved powers to reduce the financial burden, they haven’t acted and are instead too focused on pointing the finger at the UK Government and pushing ahead with their £12 million per year plans to up the number of politicians in the Senedd.”

“It is important to remember that next month’s election is about local issues. It isn’t about politicians in Cardiff Bay or Westminster, it’s about local authorities and community groups who are best-placed to understand what funding is needed for their local area.

“It is about improving communities, making sure bins are collected on time, potholes are filled in, dangerous pavements are repaired and that people receive the education and social services they deserve.

“It is also vital our councils are properly funded so they can deliver top quality services for local people, and that’s why we have made fairer funding a key pledge in our manifesto.

“Only by voting for your local Welsh Conservative champion on May 5th can we truly build stronger, safer communities and deliver meaningful change to benefit residents all across the country.”

Deputy Chair of the Party, with responsibility for elections and North Wales Member of the Welsh Parliament, Sam Rowlands MS, added:

“Just last week we announced a record number of Welsh Conservative candidates standing in the upcoming elections, and now we’ve set out our clear plan for stronger and safer communities across Wales, which they will work tirelessly to deliver if elected.

“On May 5th voters have a clear choice. It is either years of more failure from Labour and Plaid Cymru, or it is time for meaningful change to benefit communities across the country with the Welsh Conservatives.

“We want to see a fit-for-purpose road network, businesses flourishing with more jobs for local people, pride restored back into our towns and villages, and local people at the forefront of decision making.

“By voting for your local Welsh Conservatives on the 5th May, you can deliver the change that our communities need to become stronger for everyone.”