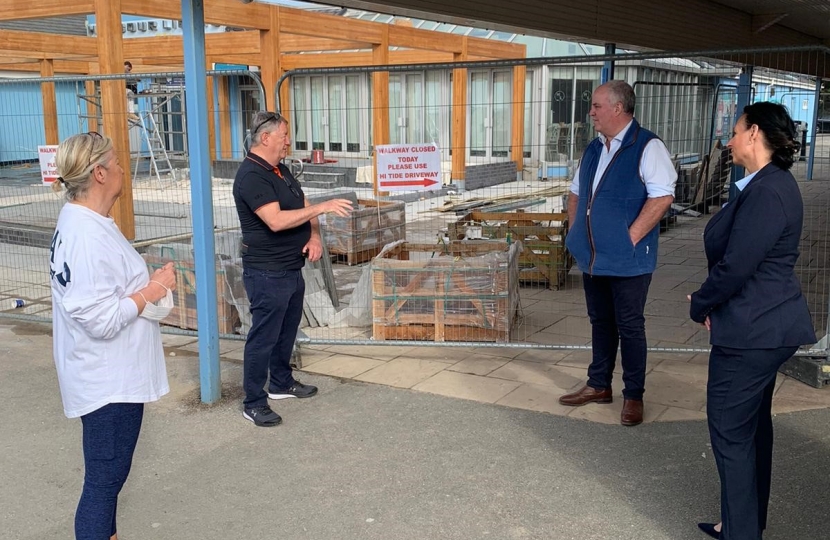 On his first constituency visit of the Senedd 2021 campaign, Davies and Bridgend candidate, Rachel Nugent Finn, visited The Hi-Tide Inn in Porthcawl.

Over the last 24 hours, Welsh hospitality firms have reacted angrily after Labour ministers "moved the goalposts" on a Covid support scheme, a theme that was echoed on today’s visit.

The Welsh Government’s Business Wales website says that the package is “designed to cover businesses until after the election, pending the continued easement of restrictions and the outcome of restriction reviews in April”.

Companies had been told a £180m Non-Domestic Rates Linked Grant was intended to cover businesses until to today (31st March), but Labour ministers have now said that has to last until at least May 6th.

Davies has described the decision as a "betrayal" of Welsh businesses and one that will put “thousands of jobs at risk”.

He has also said Welsh Conservatives will back date business support to April after 6th May as part of the party’s “Covid bounce back package” to compensate for Labour’s decision.

“The decision to move the goalposts on financial support is the latest betrayal of Welsh businesses by Labour after 22 years of broken promises.

“The decision to backtrack on support will be devastating for many small businesses and puts thousands of Welsh jobs at risk.

“Welsh Conservatives will put right this wrong after May’s election, and backdate support for those businesses hit by this decision such as the Hi-Tide in Bridgend.

“It will form part of our Covid bounce back package to support the Welsh economy, which includes the establishment of a £2.5 billion Rebuild Wales Investment Fund and the creation of 65,000 new jobs.

“Welsh businesses need proper support, not lectures from professors or academics, and they certainly don’t need another Labour-Plaid coalition, which would only hold back the Welsh economy.

“We need to get Wales on the road to recovery after the pandemic and only the Welsh Conservatives can be trusted to deliver a stronger economy and a better Wales.”