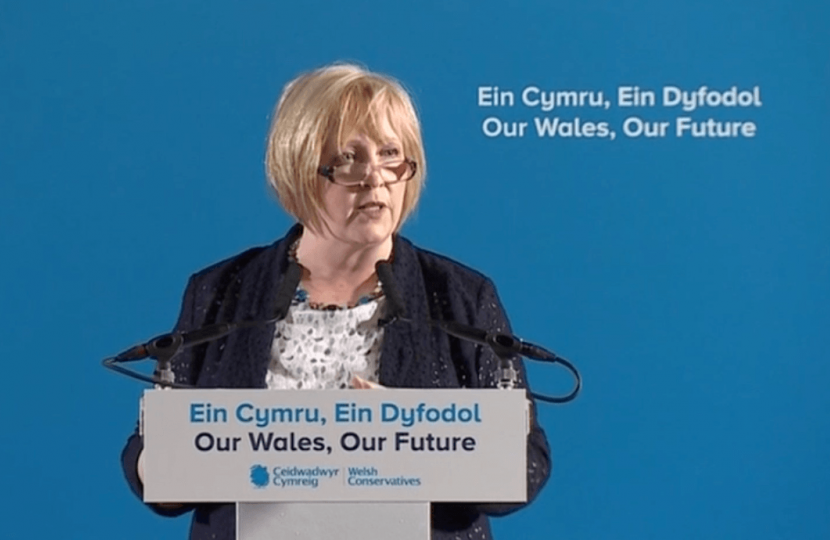 I know that many in our party will have been questioning its part in the political landscape at the moment.  In the referendum, the people instructed the government to take the UK out of the EU:  in the general election, the people failed to give the government the majority they needed to carry out that instruction efficiently and on clear terms.

Everything that has followed is because of democracy.  And it may not accommodate these paradoxical public decisions easily – it can throw these unhelpful curve balls - but it is a prize for which many have fought and died and for which many are still fighting and dying.

The women who fought and died 100 years ago allowed me to be standing here now.  40 years ago, democracy allowed Margaret Thatcher to become prime minister.  Now it’s presented us with a gordian knot of incompatibilities, laced through with everything from sadness, through disappointment, anger, spite and personal ambition.

But it still is our best protection against extremism, dictatorship, cruelty and injustice and we must cherish it even when it is dividing us.

And I ask you to remember that stamina, that resoluteness, that resilience as we will need to emerge from this united.  Democracy is quite capable of delivering us a Corbyn government if we are not.

It has already given us 20 years of Labour in Wales and, under new management with a new First Minister, we’re getting our first hints of what deep socialism looks like.  Removal of the right to buy, a smacking ban, votes for prisoners, within Labour ranks more and more republicans are showing their colours, more interest in an independent Wales.  That’s what they’re spending time on.

Meanwhile, as scandal after scandal hits our poor NHS, the Minister for Health sneers out another list of expectations and paints on another layer of Teflon to save his skin and stave off the effects of democracy

Because, yes of course democracy delivered a Labour government but it also delivered a fierce Opposition which holds that government to account with steel, evidence, intelligence and the backing of every constituent who comes to us to fight their corner against this small band of extremely powerful Labour men and women who feel they owe no-one an explanation, ignore that accountability, take Wales for granted…

…t o the extent that they’ve handed over the education of our children and young people to a party for which democracy delivered just one AM! Whose values commanded the confidence of barely anyone in Wales.  Even UKIP, with less than half its original numbers has more AMs than the Liberal Democrats.

And what have we got under our Lib Dem Minister?

When I was given the shadow education job last autumn, I found myself in the Land of Perpetual Reviews: the Hill Review, the Davies Review, the Smith report, the Donaldson Review, the Diamond Review, the Reid Review, the Hazelkorn Review. Clearly something was bothering them!

The new Made In Wales GCSEs, designed to bring out the best in our young people so they could flourish in Welsh businesses and public services. This year?  The worst GCSE results since 2005. The new English GCSEs? Well standards appear to be rising there

And we are asked to believe that years of underfunding has played no part in this?

As long as I can remember we have been telling you at Conference that children in schools in England get around £600 - £700 more per pupil than schools in Wales get.  A major teaching union has recently reported that it currently stands at £645.

And Labour’s go-to argument is that it’s those mean old Tories not passing down enough money from Westminster.

Well, the Labour government gets 20% more per head to spend than in England yet spends less per head on our schoolchildren. Sounds to me as if it’s Labour that’s falling behind in maths and comprehension.

But what has really been noticeable this year is by how much local authorities have cut core school budgets.

I hope we would all understand that children from poorer backgrounds need extra resources to progress at school. It is a core Conservative value that nothing should get in the way of anyone being able make and take opportunities.  No decent Conservative can be content with the circumstances of a person’s childhood being the limitation on their potential.

But there is also a myriad of different ways that other money is prevented from getting to schools in more affluent areas.  For example, questions about the value of consortia, which soak up or delay a lot of money, are getting more agitated and more persistent, with one council in my region threatening to withdraw altogether.

There is now a real risk that it is children in those schools who will become educationally disadvantaged as buildings rot, staff are let go and children’s other needs are unmet because of this funding fog.

And on top of all this – wholesale curriculum reform!

Now, I could easily say this the last thing a disheartened, shrinking and frankly exhausted population of education professionals need is curriculum reform.  But we cannot go on as we are.  20 years of Labour has hollowed out the heart of our education system and we cannot go on imposing such disadvantage on our young people.

The new curriculum was only launched yesterday and is now open for consultation.  Its aims are ones which should capture our attention – the creation of curious, compassionate, healthy problem solvers who are resilient and brave enough to take responsibility for themselves, to make informed decisions which consider the effects on the rights of others, to participate in a world where they can create and share opportunities for personal growth and prosperity.

Actually, we need our young people to grow up like this, empowered with a send of duty and community.  We will need them to raise Wales up, economically and socially as part of an outward looking United Kingdom not leave us stuck at the bottom of all the wrong leagues.

But the Welsh Government proposals for converting these ambitions into practical, deliverable, measurable activities for the school day looks – at this stage – to be complicated and vague in equal measure.

The Welsh Conservative jury remains out until we understand it a little more but, in the meantime, I would like our young people and our education professionals to know that we would take an immediate step to lighten the load just a little …

… and that we would scrap the Welsh Baccalaureate.

From what I have seen already the aims of the Welsh Bacc will be more than achieved by the new curriculum. Those professionals who have invested in the Bacc will not have wasted that work.  They will have a head start in delivering the new curriculum and will be, I suspect, much in demand in this new world

But more than just getting rid of duplication we also just stop wasting time and money on the confusion the Bacc creates – is it compulsory, do universities accept it, do employers know what it is, have all schools and colleges really bought into it, do they know how to teach it?

It gets rid of the temptation to cram the work into a few weeks of term after GCSEs, making a mockery of the idea of acquiring new skills and attitudes over a period of time.

But most importantly for me, it supports the wellbeing of our young people in post-16 education by getting rid of the most time-heavy, poorly balanced programme of study as regards marking scheme and creates space in their timetable for the rest of their studies.

Wales is, top to bottom, a believer in country and community. I think those beliefs are at the very heart of what binds us as Conservatives across the UK.  We must not get sucked into one issue Brexitism – we are way, way more than that:

Personal freedom, personal choice, personal responsibility – we hold those in one hand and in the other a commitment to the freedom and choice of others, shared responsibility, and united country made up of empowered individuals, empowered communities who accept responsibility for each other.  Steadfast, compassionate, ambitious, fair.

That’s the example I want us to set our children.  These are values I want our young people to see in us.  And I want them to see that it is Labour who has limited them, failed them all these years.

And they won’t see all this if they are blinded by a blizzard of Brexit obsession. We are not a one-issue party – we are way, way more than that