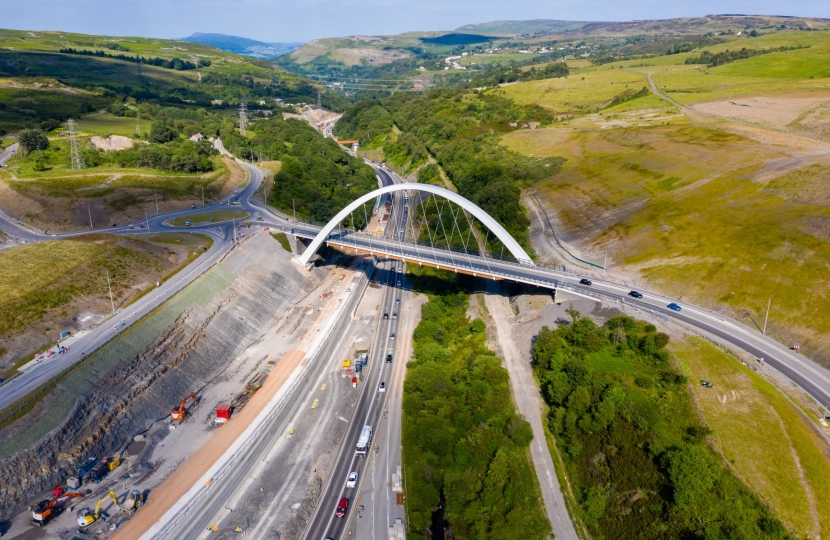 In a pasionate debate tabled by the Welsh Conservatives today (February 26), the Shadow Minister for Transport called on the Labour administration to recognise the importance of roads as vital economic arteries which promote prosperity.

Russell George AM/AC drove home the case for a re-think of roads infrastructure policy and delivery in Wales, which has been subject to delays, overspends, and missed opportunities for a decade.

The most recent embarrassment for the Welsh Labour administration was the Auditor General’s scathing recent report on Section 2 of the A465, which is overbudget by £100 million and overdue by – when complete – three years. The report, however, included a caveat: the full cost and the real completion date are “uncertain”.

“A failure to properly plan the long-term delivery of new road infrastructure and road improvement schemes, a failure to appropriately manage the procurement and delivery of road schemes and a failure to support Wales’ road network with appropriate levels of financing have resulted in a road transport system that is completely unable to cope with current levels of demand.

“All of this is having a major detrimental impact on Wales' productivity, competitiveness and economic future, all aspirations of the Welsh Government's Prosperity for All Economic Action Plan.”

“One of the worst and worrying examples of the Welsh Government’s poor management of the road network in Wales is of course the level of ongoing congestion on the M4 motorway. Wales’ only strategic road has been blighted by huge levels of traffic congestion for many years, and the Welsh Government is still yet to provide an adequate solution to that problem.

“While the Welsh Government has been dithering and shelving any meaningful schemes, the volume of traffic on the M4 is increasing.”

Mr George said that Welsh Conservatives were “hugely disappointed” that the First Minister took the unilateral decision not to proceed with the M4 relief road in spite of the support offered by the UK Government, especially now that we know that a very expensive independent inquiry – which cost the taxpayer £144m – concluded that the M4 relief road should be built.

“The Planning Inspectorate’s Report found that the Welsh Government’s assertion that it would be inconsistent with its declaration of a climate emergency is incorrect. The report found that, and I quote, ‘… the scheme would save about 4,324 tonnes of user carbon emitted to the Welsh road network each year, with increasing savings into the future’.”

The Shadow Transport Minister called on the Welsh Government to work with the UK Government to deliver an M4 relief road as soon as possible.

“We’re of course disappointed with the result of the debate, and the failure of Members from other parties to acknowledge that roads are an intrinsic part of the transport infrastructure mix here. They seem, also, not to acknowledge that there is continuing reliance on them because of the paucity of public transport in Wales under this Welsh Labour administration.

“The Welsh Labour government must get its house in order, get behind business, and back an integrated transport policy that puts smoother road transport at its heart, because this government has not done enough, and is not doing enough to facilitate faster, cleaner, more efficient transport for commuters, businesses, learners, and tourists.”