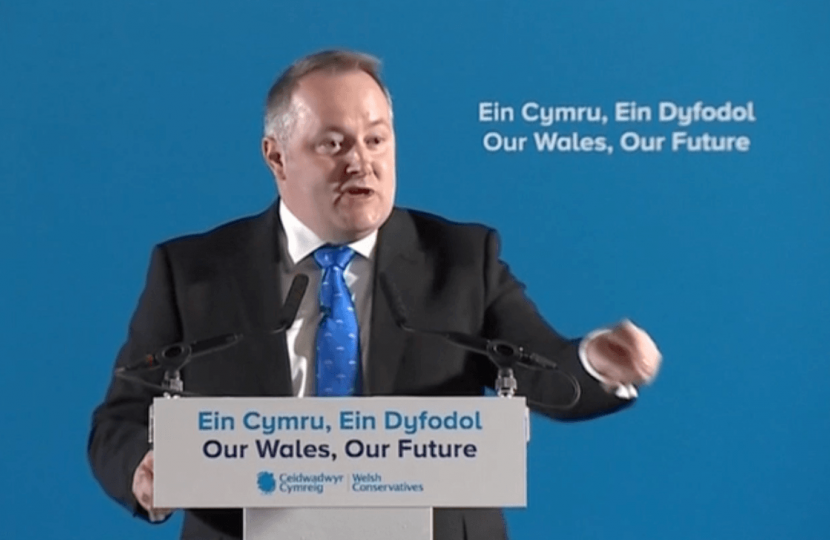 You know, the Bible says that God created the heavens and the earth in 7 days, but when you come to North Wales, you just have to believe that He spent a little bit longer creating the beautiful landscapes here than everywhere else!

Conference, this weekend marks 20 years since the first elections to the National Assembly for Wales in 1999.

It followed a hotly contested referendum, which divided our nation almost exactly in half – 50.3% to 49.7%.

And, for a number of years following the referendum, there were some all too familiar emotions, disappointment by those who voted for the status quo, and excitement around the prospect of change by those who campaigned for devolution.

I recall at the time there were strong feelings expressed by some members of our party.

Feelings that perhaps the voters had got it wrong perhaps we needed another referendum with an option for abolition.

But in the aftermath of that referendum we came back together, we accepted the result, and we committed to making the new constitutional settlement work in the best interests of everyone and for a strong Wales in a strong United Kingdom.

It’s that ability that we have to come together, to be pragmatic, and to work in the national interest that has given our party, the Conservative and Unionist Party, the greatest electoral success of any political party in the Western world.

Because we’re a broad church.

We respect individual freedom and the right of every party member to hold their own views.

We are a party with firm values, and we respect one another.

In June of 2016, the people of Wales went to vote in another referendum.

This time it was on the UK’s membership of the European Union.

There were strong views held by principled people in the Conservative Party on both sides of that referendum campaign.

But my message to you today, friends, is that referendum is over.

The people have voted.

And here in Wales, just as was the case in the UK as a whole, they voted to leave.

In advance of polling day, both sides were clear that this was a once in a generation opportunity and that whatever the result, the government would fulfil the will of the people.

We now need to get on and deliver on that commitment or we risk betraying the trust of 17.4 million voters.

And, as a party, just as we did after the referendum in 1997, we Welsh Conservatives must come back together and unite.

Because the people of Wales need us like never before.

At the next Assembly elections in less than two years’ time, voters will have a clear choice.

They will be able to choose between:

40 years ago this week the people of the UK elected our Mrs T to sort out the mess left behind by Labour in the late 1970’s.

And, in 2 years time the people of Wales will have the chance to elect our Mr D to sort out Labour’s mess here!

And if there’s one public policy area that is crying out for a fresh approach, it’s our precious National Health Service.

Welsh Labour-led Governments have been running our NHS for two decades, but they are running it into the ground.

Still reeling from a legacy of ill-advised cuts, while health spending was protected in England and Scotland, our Welsh health service is in crisis.

But there’s no excuse for underfunding.

For every pound that is spent on a patient in England, the Welsh Government receives £1.20 to spend on a patient here.

Yet the sad reality is that all we see is cuts, closures and downgrades.

And the consequences are heart-breaking.

Welsh patients wait longer for tests, longer for treatment and longer in emergency departments than over the border in England.

Conference, just down the road from here is Wrexham Maelor Hospital, a record-breaking hospital.

But its record breaking for the wrong reason.

You see, Wrexham Maelor is like every other Welsh hospital; it has wonderful, dedicated and hardworking staff, but they are overstretched and under resourced.

And as a result, in January of this year, Wrexham Maelor posted its worst A&E performance figures ever: they were the worst in Wales, and the worst in the UK, the worst ever posted in the history of the NHS.

They broke all records, with just over 49% of its patients spending less than 4 hours in the emergency department against a 95% target.

And it’s not just our emergency departments.

Labour’s mismanagement of our NHS has resulted in scandal after scandal.

In recent years we have seen investigations which have uncovered scandalous care and abuse of vulnerable elderly people on mental health wards at the Princess of Wales and Glan Clwyd Hospitals.

And this week we learnt of the appalling care and treatment which led to the death of babies at the Prince Charles and Royal Glamorgan Hospitals in south Wales.

Mothers, fathers and families, who have lost their next generation, and have been let down by failures in governance, leadership and a system which disregarded their concerns.

Yet in spite of this scandal not one person has had the decency to resign.

Neither the Chair of the Board, which was said to have failed in basic governance requirements.

Or the Chief Executive, who is responsible for the senior staff who failed to report matters to the Board or the Welsh Government.

Conference, it’s simply not good enough – these individuals should accept their responsibility for what went wrong.

No ifs, no buts, and no big payoffs.

They should be sacked!

This lack of accountability has got to change!

That’s why, as Policy Director of the Welsh Conservatives, I can announce today a five point plan to address this accountability gap in the Welsh NHS.

Under a Welsh Conservative Government:

Conference, that’s our vision for an accountable, safer and listening NHS which responds to those it serves. I commend it to you.

So, friends, the stakes at the next election could not be higher.

Our country needs us.

I know Brexit has been divisive.

But we need to come back together.

To take the fight to Labour.

To offer hope and change for the people of Wales.

For the sake of our economy and public services.

For the sake of the next generation and our NHS.

Under our excellent new Leader, Paul Davies, we are developing the ideas and fresh thinking that our country so desperately needs.

So, let’s put our shoulder to the wheel.

Let’s fight for our cause.

Because it’s our Wales, our future.