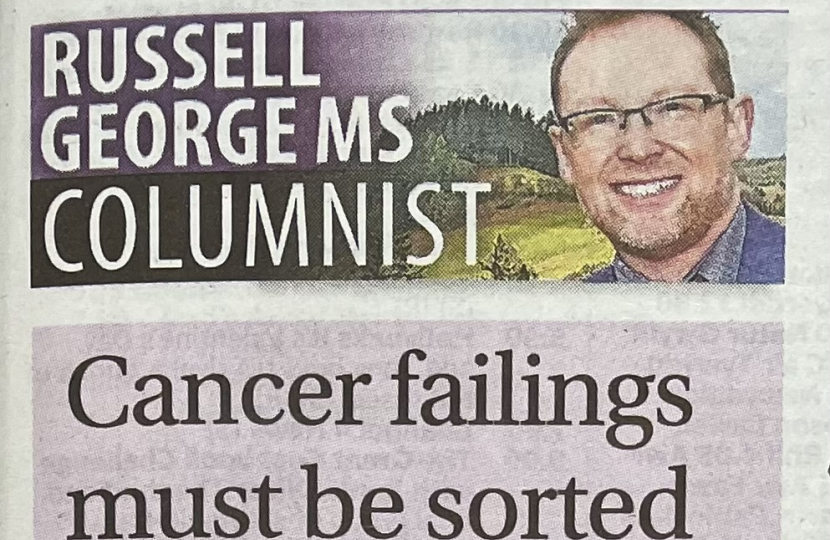 This column appeared in the Western Mail on 14 February 2022.

Last week, I led a Senedd debate on cancer services in Wales.

I felt this was an important conversation for the nation’s representatives to have as cancer can often get lost in all the talk about coronavirus, emergency care, and elective treatment.

While we, rightly, highlight the deficiencies of the Labour Government in tackling these – the highest Covid death rate in the UK, nearly half of patients spending over four hours in A&E, and 1-in-5 people languishing on a waiting list – we forget that half of us will get cancer, guaranteeing every one of us will be touched by it in some way.

Prior to the pandemic, the Welsh Cancer Intelligence Unit showed that Wales had the lowest survival rates for six cancers and the second lowest for three in the UK.

We were already behind England, Scotland and Northern Ireland when it came to female breast, lung, colon, rectal and stomach cancers, and melanoma. Wales was also the second lowest in the UK for prostate, pancreatic, and oesophageal cancers.

The disparity between the nations frustrates me greatly: your chances of survival should not be worse depending in which Bangor you are receiving chemo. Your partner should not be envious of those having radiography in Manchester or Glasgow because they are in Swansea.

This is quite simply unacceptable and we should never have entered 2020 with such poor outcomes for patients with such a serious condition.

Since, the number of people entering hospitals in Wales for cancer treatment has fallen by over 40,000 in the first year of the pandemic. Sadly, this is not because the prevalence of cancer had dramatically fallen, but because lockdowns prioritised Covid over everything else, come what may.

Although it is totally understandable why the first lockdown happened, with the need to protect the population and the NHS from the virus, it is undeniable that this has had a significant and negative impact on other illnesses.

Welsh Conservative research recently found that during the first 18 months of the pandemic, there were 50,740 cancelled operations and 1,343,467 cancelled appointments in Welsh hospitals. This shows that the costs of lockdowns extend beyond the economic, and into the realm of physical as well as mental health.

Now, current cancer treatment times suggest Welsh cancer services are not catching up on diagnosis and treatment: in November last year, just 58% of patients newly diagnosed with cancer started their first definitive treatment within 62 days of first being suspected of cancer – far below the target of 75% and the second lowest on record since June 2019.

In our debate we wanted to emphasise these points to ensure the scale of the challenge ahead was not lost on ministers. Things were bad before Covid, but it would be a dereliction of duty to think that getting back to pre-pandemic is acceptable.

We need the will and desire to make things better – business as usual means failure as usual.

Unfortunately, this still has not prompted the Labour Government to publish a proper cancer strategy. And it is not just us saying this as cancer charities have said Wales is the only part of the UK without one, stating the Cancer Quality Statement lacks detail and ambition.

This is further exacerbated by chronic understaffing: 1-in-12 staffing roles in clinical oncology are vacant. As a result of shortages, 1-in-5 cancer patients lacks specialist cancer nursing support during diagnosis or treatment.

That’s why we called on ministers to publish a workforce recruitment and retention plan for cancer specialists and a full cancer strategy which will set out how Wales will tackle cancer over the next five years after years of understaffing in the sector. Labour voted against this.

And we can even go further than this. Radiotherapy and chemotherapy are not easy courses of treatment. To alleviate the negative side-effects of treatments and allow patients to focus more on their recovery without having to worry about extra costs, we believe measures such as free dental care for cancer patients should be offered to support them through their recovery.

Cancer Research UK say there are people with cancer who worry they will die without getting the care they need. Is that right?

Well, Welsh cancer services are struggling to cope with a tsunami of missed cancer diagnoses. The appearance of later stage cancers are a direct result of pausing NHS services during lockdowns. The people of Wales cannot expect the same kind of results as in the rest of our United Kingdom.

I sincerely hoped that the political parties could unite behind our motion last week to address this grave injustice. I am disappointed that the Government did not support our motion, but I am pleased that at least the Minister acknowledged that her government has much more to do to improve cancer outcomes and agreed to give further consideration to the many points I raised in the debate.

We can live with Covid. Are we expected to live with cancer too?